Meghalaya literally means the abode of clouds. It is known as the Scotland of the East and as the wettest place on earth. The state can be broadly classified into the lands of Goro, Khasi and Jaintia. These are also the three predominant tribes of Meghalaya.

Meghalaya is a beautiful place in the hills. It doesn’t snow in Meghalaya, but the mountains belong to the Himalayan range. The hills are generally identified by the tribes that reside in them. Meghalaya is one of the few matrilineal cultures of the country with the youngest daughter of the family inheriting all wealth and is responsible of taking care of the parents. This won’t be a shock once you take a walk in Meghalaya. All businesses are run by women, women with satchels manage all the finances and they (wo)man the cash counters too. Men generally drive around tourists

Our journey in Meghalaya took us to the places in and around Cherrapunji and Mowlynnong in the Khasi hills and a small town called Dawki in the Jaintia hills. We couldn’t explore the Gora hills.

We also missed exploring the tourist attractions of Shillong as we dedicated most of our time to see the Shillong Lajong game against NEROCA FC.

In Shillong, the biggest attraction is the Elephant falls. It gets its name because of a big boulder that’s lodged at the foot of the fall. It’s a beautiful place with white gushing water. About 25 Km from the city, it is on the way to Cherrapunji and is one of the much visited places. We missed it ofcourse.

There are quite a few places in and around Shillong, within 30 km radius and on the way to Sohra. Sohra is the original name of Cherrapunji and let’s also learn to use that.

We hired a cab from Shillong for 2 days and you can read about the experience of getting the cab and other available options to reach Sohra from Shillong here.

Sohra is situated on a high altitude place surrounded by mountains all over. There are 7 mainstream places that all guides and tourist operators cover in the single day trip. We went to these places and didn’t notice 2 out of the 7 go past. One was a bridge, which is the entry into Sohra, and the second was a view point called the seven sisters water falls, its actually a view point from where we get to see seven streams of water plugging into a deep george. 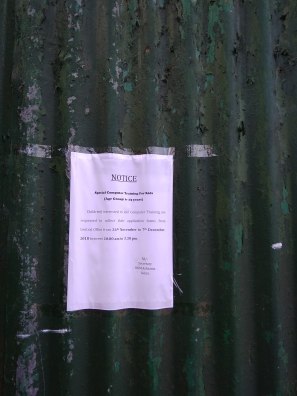 The places that we did notice and like began with the Ramakrishna Mission Highschool.

This is a temple, museum and a high school started by the Ramakrishna mission. The museum had dedicated art and artefacts curated to showcase the anthropology of the north east. It was here that we learn why our driver had told us that everyone understands English in Meghalaya. The transcripts talking about the exhibits seemed like English, but was actually Khasi. It came as a shock that Khasi uses the English alphabet as it’s official script. Later we went onto learn that English is the official language of the state of Meghalaya.

The temple and a quiet school campus with a huge quadrangle involuntarily made us conduct ourselves with the decency of being in a deciplined institution.

We saw a few children who first stared at us but were not shy when engaged in conversation. The students had finished their exams and were awaiting final results which was to be out on Dec 10. The final exams for all grades other than 10 and 12 are held in November.

We had no time left in the day as the sun had already started to go down. The driver did all he could to drive like a maniac without killing us and took us to the Nohkalikai falls before calling it a day.

Nohkalikai falls is said to be one of the highest falls in the country. 4th to be exact. We reached the view point when the sun had just gone down. We saw the falls in ambient light. The fall of water was only broken when it hit the ground, the water there was turquoise blue which left us hoping for a way to get to the foot of the water fall. There is a hiking trail for this, passionate backpackers may find it interesting.

Once the sun set, we started feeling the chills. It was colder than our previous night at Shillong. The view point had a small line if petty shops, again run by women. I shopped from some interesting looking cinnamon sticks and the famous and dreaded bhoot jholakia chilly powder. We also had Icey cold golgappas.

Cabs and buses trooped out and darkness blanketed with cold air engulfed us. We headed back into the town of Sohra looking for food and shelter.

As we had no reservations, in terms of bookings and inhibitions the next day was going to be a wonderful experience.