Jaisalmer has to be right up there! one of the most beautiful experiences in India. The dunes, the vastness of the desert, the chilly night and the beautiful buzzing fort of Jaisalmer all of this is a package to experience once before you die.

Our tour started in an early morning flight to Ahmedabad. The flight took less than 3 hours to reach Ahmedabad, just before sun rise. Since it was January, the early morning was cold, we had to wait for the rentals for an hour or so at the airport and since it was our first brush with hiring rentals, we were extra cautious, making sure the agent knew the bents and scratches on the car.

We had 2 good-looking hybrid SUVs to ourselves for the next 5 days to drive through the great Thar desert of India. Our first drive was the longest – from Ahmedabad to Jaisalmer. This was about 600 Km and google said it would take us 9 hours to get there. We strapped in started by 7 AM as the early morning Gujaratis came out for their morning routines. Ahmedabad is beautiful, the main roads are big and wide, there is a separate bus lane in the center of the road and the autos here also are green and yellow. They have a very different meter – like a water usage meter. it looked like it needed some manual winding and showed distance/fare in digits, not sure how the driver read it, but we couldn’t figure it out.

We drove two hours on the route showed by google before we started feeling hungry. We stopped at a small town on the way called Mehsana at a road site cafe that was surprisingly so well decorated that it could pass off for a quint cafe in one of the bigger cities. We had refreshing Poha and tea there and pressed on. Of course, there was dosa also available and some of us did indulge in the Gujarati take on dosa – not bad at all.

The roads were wonderful, but it was clear to us that we were in the dry lands. There was no sand, but large areas of barren hard brown ground passed us. If you are not from this part of the country, you are generally used to seeing agricultural lands or forest run past your window – not here in Gujarat – Rajasthan. By 2 PM we crossed into Rajasthan, paid the state toll for our rentals and moved on. Rajasthan initially was similar, except the change in the script of the sign boards and ads. More turban clad people and more desert vegetation. The first sighting of a Peacock crossing the road had us excited but then sighting Camels and Peacocks became common.

We also saw Army equipments being transported on the route – which again got us excited.

Without further breaks we entered the city of Jaisalmer. Like any tourist spot in was buzzing with vehicles and petty shops. Our accommodation – the Winds Desert Camp was about 30 Km out of the town and into the desert. It was already dark and well past 8. Some of us were starting to get scared of the vastness of the void. Every sign board seemed like a ghost until we started seeing huge white creatures that were sure to be ghosts – luckily they were the wind mills – wind energy producing turbines along which they had built out desert camp.

The Desert camp is a place in the middle of the desert, and your room is a tent – made of fabric and the bathroom is just another partition in the fabric. The tents though not sound proof had all conceivable amenities – lights, fans, furniture, porcelain and brass bathroom fittings, numerous plug points and what seemed like a heater/cooler. And not to mention clean sheets and blankets along with hard wood flooring.

We were welcomed to the open air theater where they had organised a performance by native folk artists who sang songs and performed native folk dance forms to entertain the guests. There were a couple more groups with us. The show was good, including the servings of assorted starters and a mini bar that served hard liquor. After the outdoor entertainment performance in the bitter cold of the desert we were ushered to the indoor dining room for dinner. We ate well – there was standard north Indian veg spread along with the native daal bati. We had a scrumptious dinner and planned for the next morning. The camel safari and the safari on the dunes was included in our hotel package so we just confirmed our numbers and the time to start – it was going be an open jeep. 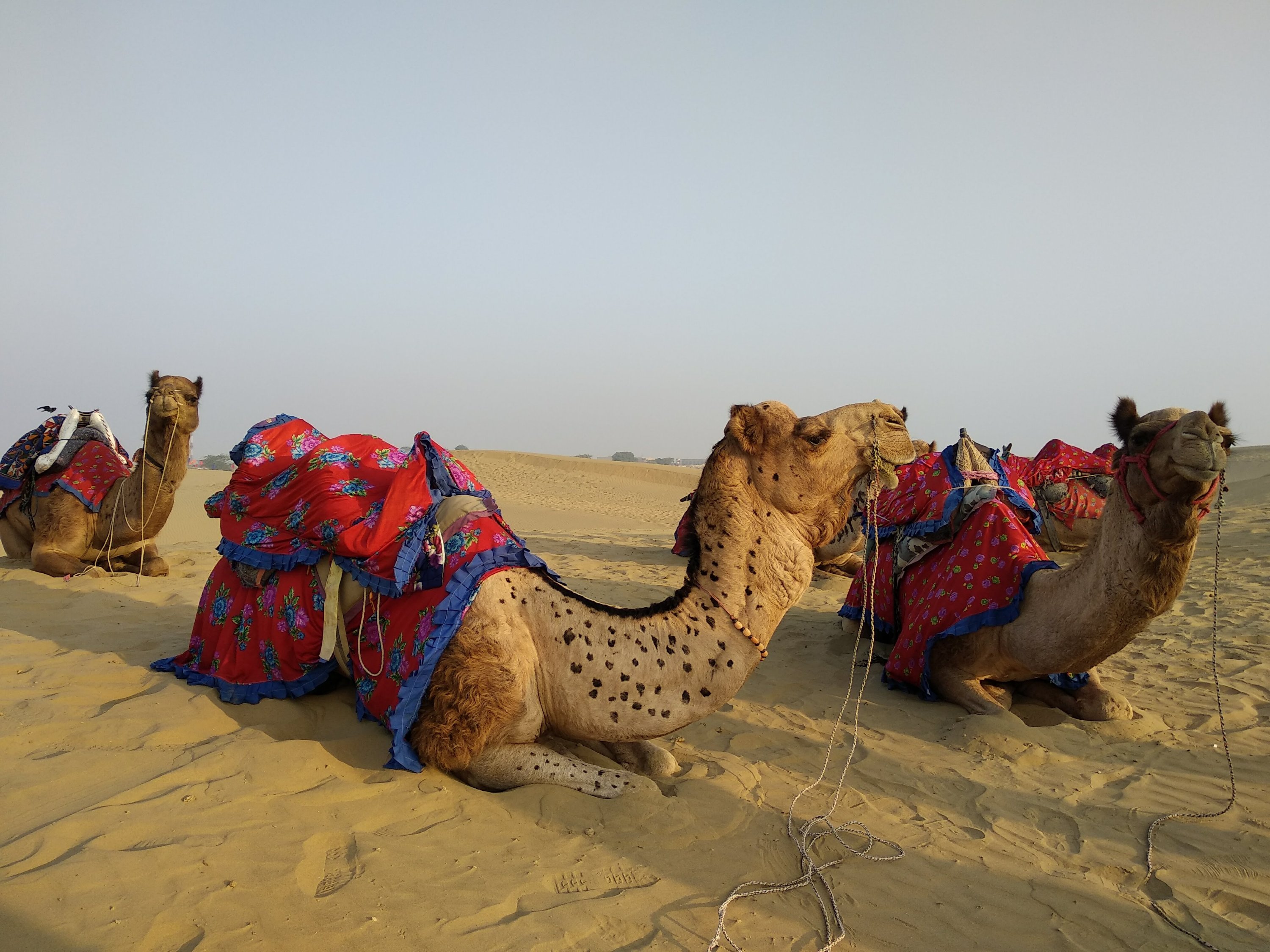 The morning was chilly, the jeep driver, like all drivers was complaining we would miss things if we didn’t leave soon. He was right, the sun rise wasn’t going to wait for us was it? We hopped into the Jeep and he tore into the desert. We clung to each other as music blasted from the speakers and freezing cold desert winds were blowing our heads off. When we went off road we saw the awesomeness of desert dune riding. The jeep fell and sank into the sand as the driver kept on accelerating. It was like riding a boat, one side you’re going up and on the other the jeep is sinking in the sand. He brought us to the sun rise view point and complained a little. We saw the desert sun, massaged to heat ourselves and took the many photos.

Just when we had begun relaxing, the driver barked at us to get on the jeep. We still had the camel ride. We got on, sailed through the ups and downs of a couple more dunes before we were brought back onto level ground. That’s where the camels came out. They were beautifully decorated and were buck toothed. They didn’t stink as much as they are generally known to stink in pop culture. Two people were made to sit on a camel and once all of us had found a seat, the man – one single man leading 4 camels made a sounds with his mouth and the camels rose. The first time a camel rises is no short of an experience on a roller coaster. The camel stands its hind legs first while standing up, hence the unexpected and sudden rise from the back feels surreal. Once it starts walking – in its camel like wonky walk, you start to feel like you are constantly being thrust forwards. If you don’t find a comfortable posture then the ride is going to be a nightmare. We rode the camels for 10 minutes before we stopped for some photos, another 10 minute ride and we were in the middle of nowhere, its where he asked us to get down and take as many photos as we wanted. We did. On our way back many more camel men came and offered us to make camels race – none of us were interested – either we were scared of the menacing visuals of a running camel or had had enough of the camels – city dwellers right?

Our ride was waiting for us as we made our way back to the starting point of the camel joint. It was around 8:30 AM, some of us had a cup of chai while shivering in the bitter morning chills. We got back to the camp, washed ourselves up and got down to the complimentary breakfast. It was an all vegetarian spread with omelettes made available on demand. Along with the side, there was a special green veggie called desert beans, this was supposed to a specialty of Jaisalmer – it was a little less succulent, but was longer.

We paid up, and said our goodbyes – we had a tight day ahead of us – see Jaisamler fort, shop, have lunch and leave for Jodhpur which was going to be a 6 hour drive. Target time – 2 PM. Time we actually left 4 PM.

Next up:
Part 3: Jaisalmer – The Town

View all posts by Dr Timepass